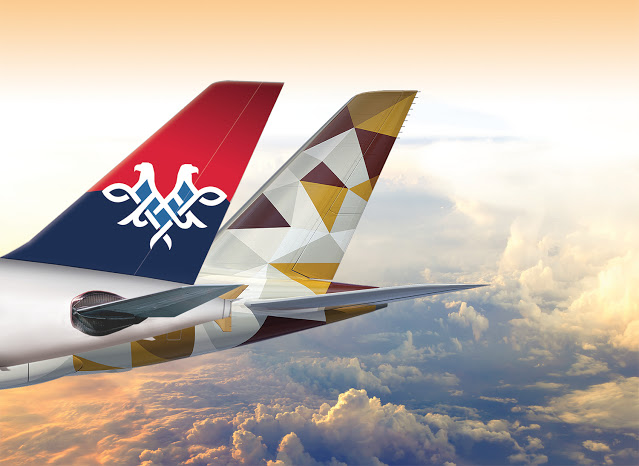 Air-to-air photograph of Etihad Airways 777-300ER, photographed in January 2006 in the USA over the state of Washington from the Clay Lacy Astrovision Lear 35.
Like it? Share this!

Air Serbia is the official flag carrier of Serbia. Hedquarted in the city of Belgrade, Serbia the carrier operates out of Belgrade’s Nikola Tesla Airport. As a full service carrier the airline operates a mixed fleet of 20 aircraft with connecting 63 destinations. The Airline has been a part of the Etihad Airways Partners since 2014. Not only as member of the alliance the airline is also part owned by Etihad with a 49% share of the airline. The other partner being the Government of Serbia with a 51% ownership.

Back in June it became know that the airline may default on debt obligations to Etihad. Like many other airlines the carrier has been hit severly owing to the travel restrictions and reduced demand caused by the covid-19 pandemic.

In September 2015, Etihad Airways closed a $700 million (624 million euro) secured bond to finance Etihad Airport Services, and equity partners airberlin, Air Serbia, Air Seychelles, Alitalia and Jet Airways through EA Partners A $500 million platform financing transaction was completed by Etihad Airways, Etihad Airport Services, airberlin, Air Serbia, Air Seychelles and Alitalia in May 2016 through EA Partners II. The funds raised by the transactions were used largely for capital expenditure and investment in fleet, as well as for refinancing, depending on each individual airline’s needs.

Etihad who have their own financial troubles to deal with in a series of moves seems to indicate an intended exit from the partnership. Back in august the carrier rejected a loan reduction proposal from the Serbian government. After announcing a resumption of flight between Abu Dhabi and Serbia in October the carrier has now indefinately postpone the connections between the two destinations.

Serbia a candidate for joining the EU approved a budget this week to fund amongst other things the restructuring of the distressed carrier in 2021 The plan however will need to be approved by the European Commision. With the recapitalization the state may also be able to increase it’s share in the airline.

“As far as Air Serbia is concerned, not only will it continue operating, we will also have enough strength and knowledge if we have to recapitalise the company and take over a larger ownership stake. This is not a problem at all. Air Serbia will be a successful airline and the pride of Serbia everywhere in the world”.

As with EU Commision norms, the government cannot bail out the airline until restructuring is adopted. The Airline however was profitable until the start of the pandemic so the losses that need to be covered remain limited. On Nov 13, Serbia’s daily Danas reported that Air Serbia had offered severance packages to around 300 people, or 20% of its workforce.

Have you flown Air Serbia Before? What do you think? Let us know in the comments below.